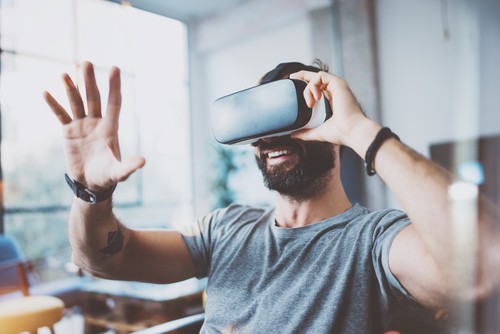 The PyeongChang Games are helping to bring virtual reality into the mainstream. And it’s cropping up in other industries too.

After helping Team USA secure a bronze medal in the figure skating team event, Adam Rippon stated that he “highly recommend[s]” attending the Olympics if you get the chance. While intended as a joke, Intel is working to make the Olympics more accessible than ever. With a full line of virtual reality headsets, you can now experience the PyeongChang games from as many as six different angles with 360 degree coverage.

What’s notable about this advancement is that the app is free and compatible with any VR device. From the elite Gear VR headset to the more entry-level Google Cardboard, Intel’s technology allows users of all kinds to experience the Olympics in an entirely new way. In a touching video covering hockey players and adopted sisters Hannah and Marissa Brandt, family and friends of the athletes get an inside look at their training in PyeongChang. “If I can’t be there in person,” shares a family friend, “I feel like this is the second best thing.”

Of course, Intel’s technology isn’t only for close family and friends of the athletes. The VR headset is intended for wide-range use amongst viewers, making great strides in terms of adoption. For many, VR devices can seem intimidating and out of reach. With this campaign, Intel has made huge strides in terms of bringing a deep technology product into the living room–great news for the VR industry as a whole.

Aside from the major market potential, the increase in adoption and integration of VR life can have a positive impact on everyday life, particularly for the disabled. A recent study in the journal Disability and Rehabilitation indicates that there is a “virtual rehabilitation setting which could allow wheelchair users to learn valuable community wheelchair use in a safe environment” (Gupta et al.) Participants in the study also noted that “an advantage of the VR system was the ability to virtually challenge them in scenarios not found within the walls of the rehabilitation hospital, providing additional training and an escape from the ‘rehabilitation bubble.’” The 2018 Games certainly shows the potential for how far beyond the “walls of rehabilitation” VR can take us.

This isn’t the only instance in which VR/AR is used in the healthcare space. Vascular disease affects 12% of people over the age of 65, and the current means of treating the condition are expensive and even toxic. WortheeMed is a growing company that aims to use AR and intelligent imaging to provide alternative treatment guidance. The current method of treatment utilizes x-rays, leading to a high dosage of radiation. With WortheeMed’s technology, the need for both x-rays and contrast guidance dyes is eliminated. They use proprietary algorithms to create a vascular map which can then be used to track vascular function in 3D. This technology is just one of the ways that VR shows its versatility across industries. 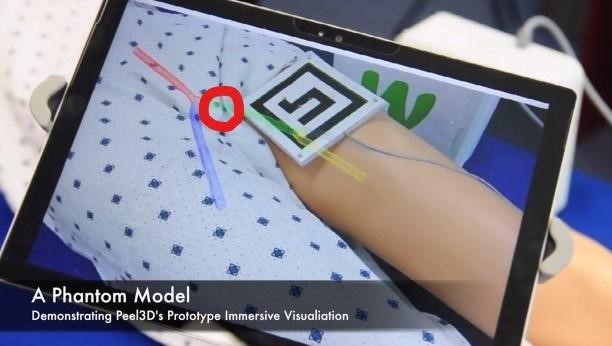 The green dot (circled in red) indicates movement through the vascular system.

It is clear that VR/AR is starting to expand to industries besides the ever-popular gaming world. In addition to medical, VR is also beginning to make its way into retail and athletic training. And as adoption from major corporations like NBC increases, other broadcasting agencies are catching on as well. The Canadian Broadcasting Corporation (CBC) is also boarding the VR bandwagon. As a public broadcasting corporation, VR would typically be on the fringe of their radar. The recent adoption shows not only that public broadcasting is becoming increasingly attuned to trends in various industries, it also confirms that virtual reality is really making a waves in the mainstream. The graph below shows that there has been a significant increase in VR usage since 2014. 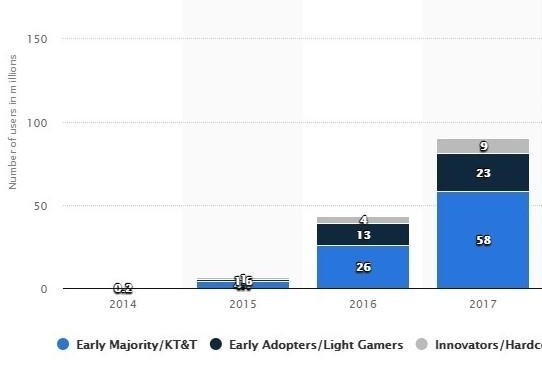 In the last year alone, the adoption rates have staggeringly increased.

Ultimately, the recent increase in VR usage, coupled with the free VR broadcasting of the Olympics, points to a future in which VR is a part of everyday life. Whether it is connecting loved ones to athletes at the Games or helping the disabled travel outside the walls of their rehabilitation room, VR pushes the limits of how we engage with the world around us.