Cellular Proximity: For Propel(x) expert and Stanford Ph.D. candidate, Emma Chory, the recent publication of her review on Cellular Proximity in the esteemed Science Magazine was nothing short of thrilling. “We were so excited,” she said.

For the first time in such a prestigious magazine, the roundup gathered into a single article several studies in the area of cellular proximity and the exciting developments that have come from the discovery that the relative closeness of proteins within a cell can have lots of impacts on cell function and communication.

Moreover, researchers can actually control and induce cellular proximity chemically, a capability which may open the door to lots of new medicines. 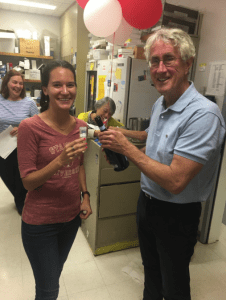 For her and her co-authors, Dr. Ben Stanton and Professor Gerald Crabtree, getting the story published at all was something of a gamble. Ordinarily, these reviews begin with the magazines themselves. They tend to reach out to “hot” researchers and personally ask them to pen a review. In Chory’s case, however, her team wrote the review up themselves and sent it to Science — totally unsolicited.

“Quite honestly, I don’t think we thought they were going to want to publish it because Science only publishes one review per issue.” Nonetheless, she and her co-authors felt the work was important, regardless of whether the magazine would pick it up.

Not long after, her team found out that other scientists were vetting her review — a key step toward publication.

To their delight, the article was finally published this month, leaving other professors in her department impressed by “the balls it took to send an unsolicited review to Science.”

Molecules of a Feather

Cellular Proximity: The review—unfortunately, trapped behind a paywall—is quite complex. However, the basic premise—that two things must be close together in order for an effect to occur—has informed a lot of basic discoveries in medicine and biology over the last 25 years.

As Chory explains, this idea of proximity is fundamental to the physics of the universe.

“The basic underlying principle of Einstein’s theory of relativity is that molecules can’t act at a distance. So if you’re going to have some biological outcome, you know: a gene is going to turn on or a signal is going to be sent across cells or any sort of neural communication— none of those things can really happen if the players that are involved aren’t physically close to each other.”

“For a really long time, actually, it wasn’t even really clear that this was true.” A cell is, after all, made up of lots of little organelles swimming around in a goopy soup. Why would it matter where each of those bits was located relative to one another? 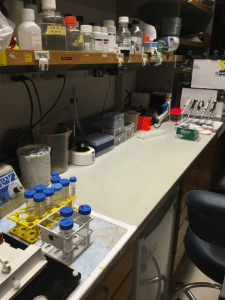 Where the magic happens. Emma describes her lab bench as pictured as the “cleanest it’s ever been”.

A Look Inside the Lock

In the late 90’s, all that changed when Chory’s co-author and mentor, Stanford professor Dr. Gerald R. Crabtree, discovered a way to control the cellular proximity of molecules to one another and study what happens when you push them closer together—to force a kind of microscopic handshake—or pull them further apart.

Up until that point, it was not possible to observe such a handshake, step by step. Crabtree had found a way to slow down molecular communication, subdividing the process (and its outcomes) into smaller, observable parts. Instead of merely watching a key go into a lock, scientists were now able to look at every single pin.

For the last fifteen years, this line of inquiry has continued to pay dividends, with teams all over the world leveraging cellular proximity to conduct their own studies. By strategically forcing molecules together or apart, scientists have gained a greater understanding of the mechanisms around a variety of diseases from diabetes to dementia.

These discoveries have facilitated a broader understanding of microscopic cellular interactions and have also empowered scientists to rearrange things and move molecules around for the possible development of cellular and molecular therapies.

Destruction as a Force for Good

Chory says that some of the most exciting recent developments have been found in what she calls cellular proximity-induced degradation, a process that puts magnet-like molecules called Degraders next to diseased proteins to rip them apart. She hopes degradation will revive lots of drugs that have already failed in the clinic.

See, there’s a whole suite of failed drugs that are capable of “finding” disease proteins but terrible at doing anything about them. By super-charging these drugs with Degraders, they become more than just reconnaissance: they become warriors.

“What a lot of people don’t realize,” says Chory, “is that for decades there were tons of medicines that were FDA approved that people had no idea what the biology was doing.”

This, unfortunately, has had lots of negative outcomes. The drug Thalidomide, for example, caused thousands of birth defects when doctors prescribed it across Europe in the 1950’s. Today, we understand that the reason the drug failed is that its molecular composition forced two proteins into cellular proximity: the first necessary for fetal development and the second a Degrader that destroyed the first.

Chory says that as the field learns more about the power of cellular proximity, biologists—and by extension, drug researchers—can expect to have ever-more intuition and control into what a result will be. This means fewer dead-ends during the research phase and fewer unforeseen side effects when new drugs finally come to market.

Cellular Proximity, it seems, has already begun to bring us—ahem—closer to a more healthy future. No pun intended.

Information discussed here is not intended to be nor should it be construed or used as investment advice, a recommendation, or an offer to sell, or a solicitation of an offer to buy securities. Any offer or solicitation of an offer to buy security can be made only through official offering documents that contain important information about risks, fees, and expenses. Private investments are highly illiquid and risky and not suitable for all investors.