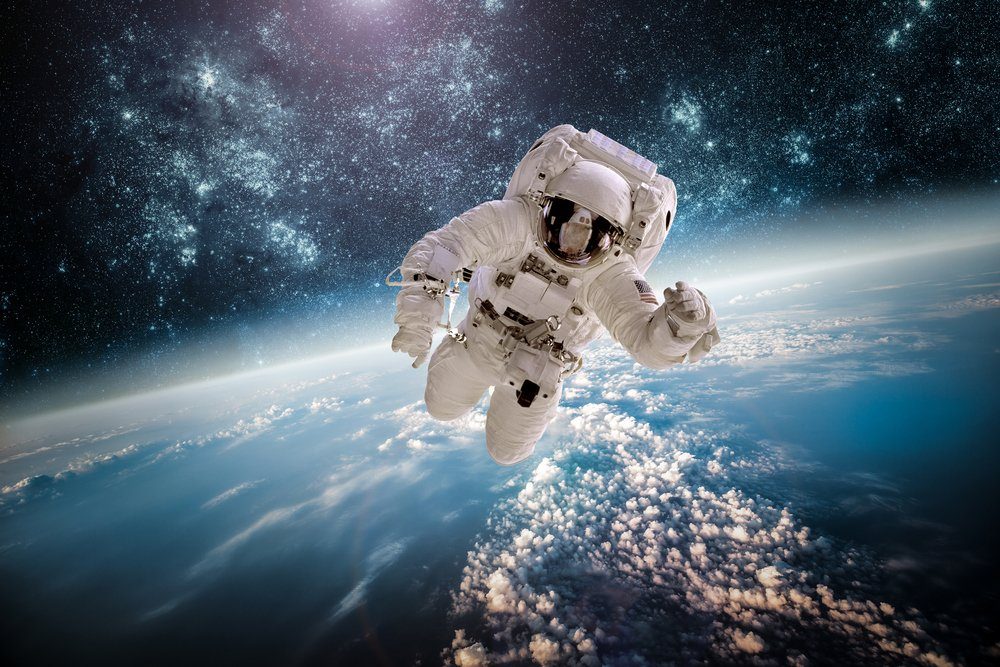 Positron Dynamics in the Making: Ever since Jules Verne and before  –  perhaps as early as the 5th century B.C.  –  writers, philosophers, and scientists have brought fantasies to life about spaceships carrying humans to other planets, positron physics, solar systems, and galaxies.

Of all the potential targets, only the moon thus far has hosted Earthling “boots on the ground.” Next on most wish lists is Mars. NASA’s tentative schedule designates the first manned mission sometime around 2030.

Aside from the formidable task of designing a safe, efficient vehicle to transport people and supplies, such a mission — depending on the positions of the two planets and other logistics — would take in the neighborhood of nine months each way. Not only is that a long trip, but it would also expose the human body to ambient space radiation for close to a year. Can’t this travel time, many have asked, be cut down somehow?

Enter Paul Dirac. The late Paul Dirac. Some 85 years ago, the soon-to-be-legendary physicist predicted the existence of antimatter  – a calculation that was to win him the Nobel Prize in 1933. Antimatter is composed of anti-particles, which have the same mass as particles of ordinary matter but opposite charges. Specifically, Dirac proposed the existence of a positively-charged anti-electron, now called the positron.

What is the connection between Dirac’s discovery of antimatter in 1931, and the anticipated dawn of manned interplanetary flight?

Positron Dynamics: Fast-forward to 2016, and an upstart physicist named Ryan Weed. Since he earned his Ph.D. in positron physics in 2011, Weed has become a champion of the positively-charged particle, starting his own company  –  Positron Dynamics  – that appears to be well on its way to establishing the positron a keystone of future, manned space flights to Mars and beyond. The aim of Positron Dynamics is to substantially reduce travel times to myriad celestial destinations.

“Rockets are too slow,” Weed says matter-of-factly. The speediest current craft, Voyager, trundles along at 15 kilometers per second. “That may seem fast,” Weed says, “but at that speed, it takes [almost] a year to get to Mars, 10 years to Pluto, and about 30,000 years to get to Alpha Centauri, our closest star. I don’t want to wait that long.”

Weed and his colleagues are taking the positron to a new level by utilizing everything that has been learned about positron physics since Dirac proposed the particle, and Caltech physicist Carl Anderson proved its existence shortly after that.

Their goal: to use the positron to power manned space ships through the process of annihilation — placing matter and antimatter particles close enough to each other that they “disappear” and turn into pure energy. “This is the universe’s most efficient way of turning mass into energy,” Weed says.

Most importantly for future space explorers, Positron Dynamics promises to increase the craft’s speed to 1G, a sustained acceleration the human body can handle, Weed says. At that speed, the trip to Mars would take less than a month, to Alpha Centauri (4.3 light-years away), 5 years and Kepler 452 B — an Earth-like planet some 1,500 light years away — 12 years.

Weed’s positron-power proposals are being increasingly well-received, including at NASA. “It’s beyond feasible,” says Charles Ivie, a retired NASA scientist, astronomer, and spacecraft systems designer. “It’s a natural next step” in spacecraft propulsion, “as fundamental as the discovery of the steam engine.”

Before astronauts can step aboard the first positron-powered spaceship, Weed says, there are three basic issues to be resolved for Positron Dynamics: Production of the positrons, trapping them, and directing the resulting energy to propel the ship.

To achieve the first two milestones, Weed and his team at Positron Dynamics use a radioisotope source to continuously emit positrons. Then, they run it through a “moderator” they designed to create a high-intensity cold positron beam. Using these cold positrons immediately bypasses the need to develop long-term antimatter storage technology.

The key to these two critical steps is not only to produce positrons but to transform them from hot to cold. Emitted positrons are a million times hotter than the surface of the sun. “You have to create cold positrons in order to work with them,” says Weed. To this end, his moderator device — which measures a tiny 3×3 millimeters — uses several layers of silicon carbide film to extract individual positrons and an electric field to cause the particles to drift to the surface of each layer, where they can cool.

The ability to use more than one layer in Weed’s design enables the production of a usable number of cold positrons. Previous versions contained just one film layer, in which only 1 in 1,000 protons emerged cold. “The moderator forms the heart of all our propulsion concepts,” Weed says.

But the spacecraft will never budge, let alone speed along at 1G, without solving the third problem — diverting, or directing, the trapped energy from the annihilation process to propel the rocket. To achieve this, Weed, CEO of Positron Dynamics, and his team use fusion reactions to transfer the kinetic energy of the gamma-ray-producing positron beam into charged particles. Because charged particles “like” to follow magnetic field lines, Weed and his team at Positron Dynamics employ magnets to direct the energy and produce the holy grail of thrust.

Positron Dynamics’ timeline is to accomplish all these details, not so coincidentally, with NASA’s target date of 2030–35 for a manned Mars mission. The company’s proposed milestones and their corresponding dates:

There are, of course, many details to be worked out between now and then — not the least of which would be to build a ship with its own on-board positron generator to sustain the quantity of positrons (about 10 to the 15th power per second) necessary to power it all the way to Mars at 1G.

If all this comes to fruition, Weed says, the benefits would be incalculable. First, the one-way trek to Mars would be reduced to period of weeks, compared to the nearly one year with chemical rocket fuel. The shorter flight would not only make it much easier for passengers, but it would also expose them to far less space radiation, he points out.

Further down the road, positron rocket ships could bring dreams of human travel to other planets — and beyond our solar system — closer to science than science fiction. Kepler 452 B, for example, is commonly referred to as Earth 2.0 because it is roughly the same distance from its sun as Earth is from our sun and, therefore, theoretically capable of supporting life. “A lot of people want to go there,” Weed says because, “maybe there’s life.” At 1,500 light-years away, that is out of the question using conventionally-powered craft. But with positron power, he says the trip would take about 12 years.

Even the edges of the universe, at some 13.5 billion light years away, could be reached in 30 years.

But there’s a catch — and a big one, as Einstein and others realized many years ago. At the speeds required to carry people such huge distances in such relatively short times, time itself becomes relative. (The 1 G speed — about 10 meters/sec/sec — increases with the duration of the trip.) While just five years might elapse aboard a spaceship speeding to the star Alpha Centaur, nine years would elapse on Earth, Weed says. And the 12 years that pass on a ship to Kepler 452 B translates to 1,500 years on Earth.

“With a transformative technology like this,” Weed says, “we have to think seriously about the consequences…and new questions that arise. If we want to go beyond our galaxy, we’re going to have to say goodbye to” Earth as we know it.

But lest everyone gets too far ahead of themselves, Ivie — the former NASA scientist — emphasizes that positron technology holds great promise for more immediate quests, starting with simply supplying “a rocket system with good fuel economy.”

Even if positron power proves not-quite-ready as a thrust source, he says, initially it could be used to economically and efficiently power all the electronics on a mission to Mars. It might also be used as a power source on Earth, he suggests, for everything from remote places such as Antarctica to nuclear submarines to deep underwater facilities, to commercial aircraft. “There’s almost no limit to where it can go,” Ivie says. “I think these people [Positron Dynamics] are in a breakthrough position.”

As for Weed, CEO of Positron Dynamics, he is looking to fulfill his own dream of shepherding the promise of positrons to reality. That’s been his goal ever since 2012, when he asked some of his colleagues to join him at Positron Dynamics and help “build an antimatter rocket.”

Should his rocket be the first to transport people to Mars, would he want to be among the crew of that historic flight? “Absolutely,” Weed, also an Air Force pilot, says without hesitation. “I wouldn’t say no to that. I’d get the chance to fix it if anything breaks.”